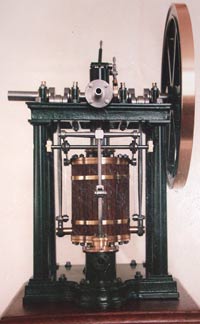 Bodmer’s sliding cylinder engine is rather unusual in that the piston is held in a fixed position and the cylinder reciprocates. It was patented by Johann Georg Bodmer in 1841. Bodmer was a Swiss of German descent, born in Zurich in 1786. He first came to England in 1816. He spent many years in this country before returning to Zurich in 1860, he died in 1864.

He was a brilliant engineer and patented many designs, not only for engines but locomotives, cotton machinery, marine work and much else. Amongst his patents were Breech loading guns, the bayonet and its fixing to rifles, textile machinery, the chain grate stoker, variable expansion valve gear with left and right hand threads, commonly attributed to Meyer. Multi-syphonic locomotive firebox, the slotting machine, the radial drilling machine, the rocking grate for furnaces. The vertical lathe or boring machine, the idea of corridor trains. As you can see he had a very fertile mind. He had his own engineering works first in Bolton and later in Manchester and introduced the metric system there. A bit of a workaholic, he often worked a 16 hour day.

The sliding cylinder engine appears amongst a number of inventions all under one patent. Whether it was ever built I do not know, but some of his designs were built at his own factory. His drawing shows it arranged for use in a paddle ship but he does note that it is also suitable for land use. I have arranged it as a stationary land engine. The columns and frames following along the lines of other engines by Bodmer.

The model has a 9” (228mm) diameter flywheel, and the castings for base, entablature, cylinder, covers, and flywheel are in gunmetal. Drawings and parts list are available and there are 30 in the set, all of A4 size, and the dimensions are in both imperial and metric.

The model can be built on a 3½” gap bed lathe, though a milling machine does make things easier.