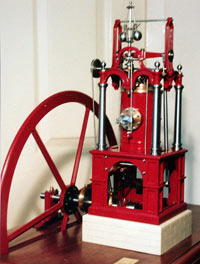 For details of this engine I am grateful to a friend in France who kindly sent over some drawings of French stationary steam engines taken from a book published in the 1860s. It was in two volumes, text and plates, but only the plates had survived. So I am unable to give any background information on the engine to be described. Except that Farcot was a major manufacturer of engines and machinery in France and his name crops up quite often in French steam engine books.

The moment I saw the engine I thought it looked very elegant and would make a very attractive model. The more I looked at the design the less I felt that castings would be needed. The only way to get the detail required would be with lost wax castings, and this would be prohibitively expensive with the quantity and sizes required. Therefore I opted for a fabricated design.

All the parts can be machined on a Myford 57 lathe, except for the flywheel. This is 400mm diameter and only 8mm thick. The bosses are bolted on as in the prototype, so I had the flywheel profile milled from plate including the + section spokes. If there is sufficient demand these can be supplied ready milled.

An alternative will be a laser cut mild steel blank and you can mill the webs of the spokes yourself.

The cylinder was double steam jacketed, so while the cylinder looks very big and powerful the working cylinder was in fact quite small. I have used only one jacket in the model and the design lent itself to be made from continuously cast phosphor bronze tube (easy machining type). The cylinder was a most enjoyable exercise to build, as it was machined on all surfaces. No castings to clean up.

As you can see from the photograph the entablature, connecting rod guides and governor bracket are very ornate. As for the governor this is in a class of its own. At first glance a standard Watt type. Its operation gets more and more involved the further you look into it.

As the governor operates it engages with three bevel gears in a sort of differential gear. As it rises it drives one way, as it falls it drives the other. This motion is transferred via another set of bevels to a vertical drive shaft. The other end of the shaft ends in a worm and wheel, pivoted in the centre of the steam-chest, which is itself circular.

In the prototype the valve consisted of two slide valves one on top of the other, along the lines of Meyer valves. As the centre pivot moved by the action of the governor it opened and closed the top valve altering the cut off.

To the left there was another lever that through a shaft terminated with a spur gear in a pocket behind the slide valve. The lever could be pulled forward engaging the gear with a rack along the side of the valve. Thus the slide valve could be moved independently for starting purposes.

I expect all the parts could be made for the model, but there would not be the power from the governor to drive the bevel gears let alone the slide valve. So I built the governor as a decorative but non operational mechanism. The wheels go round but nothing happens.

The large size of the flywheel requires the whole engine to be raised up to clear. Either by putting the engine on a stone or brick pedestal or building a deep wooden base to house the lower half of the flywheel.

I have shown the air pump as it is quite distinctive and indicates that the engine was of the condensing type. But like the governor in does not need to work, as I suspect nobody will ever run the engine as a condensing engine.

No materials are being supplied for this engine only a set of drawings, which consists of 41 all of A4 size, plus a parts list. The dimensions are shown in metric only. The model has been serialized in Engineering In Miniature from November 2003 to ?