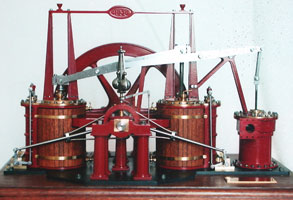 Galloway’s non dead centre engine was patented in 1838 by Elijah Galloway and was an attempt to build an engine with the advantages of self starting in any position with the simplicity of a single crank.

As can be seen there are two vertical cylinders connected by a connecting rod of triangular configuration to a single crank placed between the cylinders. As the pistons are 90 degrees out of phase to each other there is never a position where the piston of at least one cylinder cannot bear upon the crank.

During each revolution the top beam of the connecting rod goes from horizontal to an angle as the piston rods are in a fixed plane some means of extending the beam is required. This is accomplished by having sliding bearings in the crossheads.

Having a lever going up and down to the side of the engine it was a convenient place to put an air pump driven by said beam.

The engine was designed for marine use driving paddles and for land use as a stationary engine. It was built but was not used a great deal at the time. It was reinvented by Bernay’s in 1874 and again in 1887 by Fleming and Ferguson, who used it as a marine engine driving screws. In this instance the cylinders were inverted. It was licensed by Fleming and Ferguson to Musgrave’s who built as a compound, triple and quadruple expansion mill engine. A small compound has survived and is in the care of The Northern Mill Engine Society at Bolton.

The model was built using a Myford ML7R lathe and VMC milling machine. There are 40 drawings all to A4 size, dimensions are in metric only. The flywheel is 228mm (9”) diameter. Castings for the flywheel, cylinders, covers, eccentric straps, pistons, air pump, bearing beams, bearing frames, covers and steamchests are in gunmetal.

The engine is fascinating to watch in motion, it has to be seen to be believed.

The engine was serialised in Engineering In Miniature from August 2001 to June 2002.